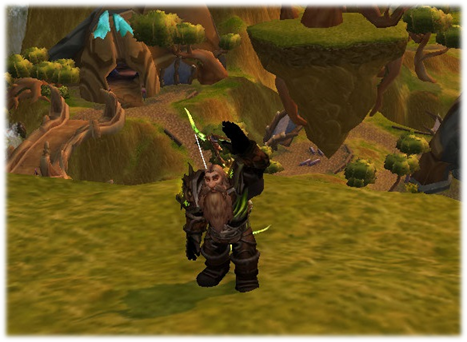 On one toon or another you have probably met Darkwind’s Hukura. He has been with our guild for just about a year and a half by his estimate, but he has been playing World of Warcraft for 10 years!

Ten years is a loooooong time; when asked how he got started playing the game he said “I went to visit my cousin and she told me all about this game my uncle was playing. She had his account information, so we made a character on his account and played for HOURS! After that… I was pretty much hooked.”

Although in 10 years Hukura hasn’t lost interest in the game, he claims he gets bored easily… which is why he has so many level 100s. This is also why, depending on when you met our friend and guild mate, you may want to call him by a different name. (For example: I, Joyus, keep wanting to call him Malfrost, his main for most of MoP).

He clearly has a lot of experience playing multiple classes, so I asked him what his ultimate favorite class and spec is. He told me “Although I don’t play it often, I really like to play beast mastery hunters. You can solo lots of stuff.” (Kaireel, in the photo, is such a hunter…at least that’s what Mr. Robot tells me).

Out of all his time playing the game his most memorable experience would have to be raid nights in Vanilla WoW. Eight different guilds would come together to form the 40 man required to get the job done. He tells me “they were really enjoyable people and, while Darkwind is great, your first is always memorable.”

Since coming to Darkwind, Hukura’s favorite thing to do in game is PvP with guildies. What’s his reason? “Just because people actually do things-it’s great!” Perhaps we will see more of him on Friday nights for guild PvP? *wink wink, nudge nudge*

If he could vacation anywhere in game he’d pick the beautiful and scenic Nagrand from Outlands (the BC version… not the WoD version). When I found that out, we did our photo shoot for this article there ;-).

Should a miracle happen and we were able to turn any one in game mount into a real life mount he’d pick the Darkmoon Dancing Bear as his mount of choice. “I love that thing! I worked so hard to get it!”

When not playing WoW, Hukura works retail. He also loves to play Magic the Gathering (“I play every chance I get”), ranked Hearthstone games, and a little bit of League of Legends. His ideal job would be at a game store so he had a reason to talk about Magic more.

So… if you see a toon in “old” Nagrand riding a Darkmoon Dancing Bear and talking in general chat about Magic… chances are it’s Hukura! Give him a high five and a hello the next time you see him online.

*If you would like to be interviewed like this for our next edition of Get to Know Your Guildie, please send a tell or an in game mail to Joyus… or any available officer who will relay your message.*